HANOI, VIETNAM – Media OutReach – 29 March 2021 – The VinFuture Foundation announces that over 500 prominent scientists, universities, and recognized organizations from 36 countries, representing six continents have registered to become the Official Nominators for the VinFuture Prize over one month after the Foundation launched its Call for Nominations. Such impressive figure demonstrates the enthusiastic response from the world’s scientific community to this newly established sci-tech prize as well as VinFuture’s mission of serving humanity. 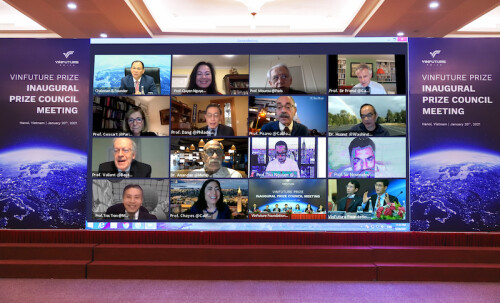 The Prize Council held its inaugural meeting on January 20th, 2021, agreeing that nominations will be sought from all nations and on a global scale.

The VinFuture Prize officially launched its call for nominations on February 3rd, 2021, and has so far attracted more than 500 recognized scientists, universities and organizations around the world to serve as Official Nominators for the Prize. The majority of nominators are from Asia (35,6%), North America (32%), and followed by those in Europe (21.7%), Oceania (7.2%), and Latin America and Africa (3.5%).

Regarding the areas of expertise of the organizational/individual nominators, due to the impact of the COVID-19 pandemic and the urgent demand in healthcare, nominators in the field of biomedical research constitute a large proportion of 29.2%, followed by chemistry-physics (23.6%), computer science, data, artificial intelligence, and robotics (16.3%), and environment, renewable energy and new materials (18.3%).

The remaining are individual/organizational nominators in the interdisciplinary fields.

The nominators are globally influential experts, reputable researchers, and scientists, laureates of international prestigious science and technology prizes, as well as renowned universities, academies, research institutes, technology corporations and innovation incubators from 36 different countries. Notably, there have been favorable responses from scientists at leading universities and research institutes in the world, such as the Harvard University (USA), where many prominent scientists converge; the National Institutes of Health (NIH, USA) – the lead agency of the U.S. government in public health; the Max Planck Society (Germany)- the world’s leading research organization in science and technology; the University of Cambridge, the University of Oxford, which are well-known for natural science and engineering, being home to many Nobel Laureates; the University of Tokyo- the leading higher education organization in Japan and the Chinese Academy of Science, the world’s largest research organization.

Dr. Le Mai Lan – Vice Chairwoman of Vingroup cum Designated Representative of the VinFuture Foundation remarked: “VinFuture Prize is a new initiative and is also the first science and technology prize originating from Vietnam. Hence, we are delighted to have more than 500 recognized organizations and individuals and from all over the world register to make nominations in just over one month after we launched the Call for Nominations. This is an impressive figure boosting our confidence in VinFuture’s mission to serve humanity and in its introduction at the right time meeting the right demand, as well as confirming the endorsement and support from the sci-tech community, academies and societies, universities, and incubators around the world. The fact that the Prize is introduced whilst we are facing global challenges has been a motivation for VinFuture to continue looking for well-deserved and impactful scientific innovations and solutions that may bring about meaningful change to the humanity.”

The VinFuture Prize is a global science and technology prize founded by Mr. Pham Nhat Vuong, Chairman of Vingroup, and his wife, Madam Pham Thu Huong, to recognize groundbreaking scientific discovery and technological inventions proven to create or have the potential to create better change in the everyday lives of millions of people and foster a sustainable living environment for future generations. Apart from the VinFuture Grand Prize of VND 70 billion (equivalent to US$3 million – one of the largest global prizes), three Special Prizes of VND 11.5 billion each (equivalent to US$500,000) will be awarded annually to innovators from developing countries, female innovators and innovators with outstanding achievements in emerging fields.

The Call for Nominations for the 2021 VinFuture Prize is available at www.vinfutureprize.org until June 7th, 2021. The laureates will be announced in December 2021 and the official award ceremony will be held in Vietnam in January 2022./.

As it strengthens its regional focus, VP Bank announces key appointments in Asia with Johnny Heng as Head of Singapore Branch and Kenneth Chan...