SINGAPORE – Media OutReach – 22 April 2021 – Today, Twitter announces that Yu Sasamoto has been appointed to Vice President for the unified region of Twitter Japan, South Korea and Asia Pacific (JAPAC), effective from 1 May 2021. Yu has been promoted to this newly expanded regional role, succeeding Maya Hari, who has been promoted to a global role as Twitter’s Vice President of Global Strategy and Operations (GSO). 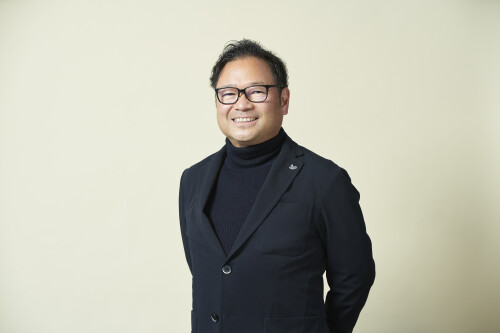 Yu has led Twitter Japan and South Korea for the past seven years and will now be responsible for Twitter’s advertising business across the JAPAC region; including Australia, Greater China, Japan, India, New Zealand, Southeast Asia, and South Korea. Yu will move to Twitter’s Asia Pacific headquarters in Singapore for this expanded regional role. He will continue to serve as the General Manager of Twitter Japan and head of Twitter Client Solutions in Japan until his successor is hired in Tokyo.

Yu Sasamoto, VP of Japan and Asia Pacific, Twitter added, “I’m thrilled and honoured to be tasked with leading the powerhouse that is the new unified JAPAC region for Twitter, and working closely with our world-class talent across the region. Not only does Asia boast a rich, diverse culture and society, it also breathes innovation and vibrancy – and being at Twitter means we get to be on the pulse of everything that’s happening. I’m looking forward to bringing more people, communities, brands and partners to Twitter as we build on the incredible business momentum from Maya’s leadership across the region.” 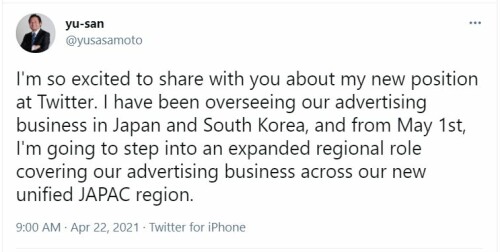 Before joining Twitter, Yu’s previous experience includes serving as CEO of MTV Japan, Managing Executive Officer of Microsoft’s Greater Asia Pacific Region for two years, and COO of restaurant search engine and review site ASKU (which he founded) for two years. Yu earned an MBA from the New York University Stern School of Business and a BA in Law from Dokkyo University in Japan. Follow him at 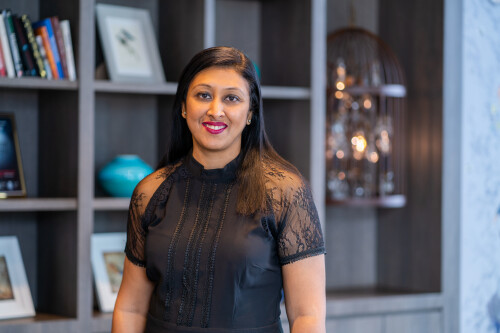 After four years of leading Twitter’s Asia Pacific business (excluding Japan and South Korea), Maya will now lead a global team focused on customers and revenue product strategy, operations, innovation and automation to enable commercial and content partnerships efforts around the world. She will still continue to be based in Singapore and her global appointment aligns with the company’s overall belief that having more leaders and employees living and working in places that are representative of all perspectives and cultures will help Twitter be a better service and company.

Maya Hari, VP of Global Strategy and Operations, Twitter said “Asia has seen tremendous growth for us in recent years, with this only accelerating during the COVID pandemic as people across the region connected more with their interests and communities virtually. We are delighted that Yu-san will be stepping into this expanded role – it is a testament to everything he’s achieved at Twitter to date, leading Japan to become among our largest revenue markets globally. In my new role, I am excited to work with him and our other international leaders to grow our businesses around the world and find new opportunities for Twitter to serve the global public conversation.” 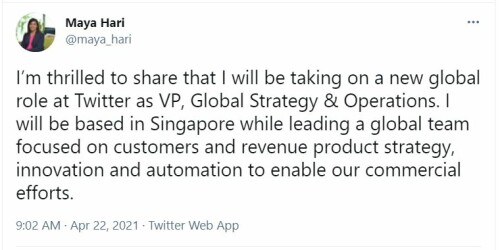 Prior to joining Twitter in 2014, Maya spent over 15 years in the digital media, mobile and eCommerce industries across the US and in Asia Pacific for brands such as Samsung, Google, Microsoft and Cisco. She was also responsible for launching and bringing Internet and mobile offerings to top tier publications such as Vogue, GQ and Condé Nast Traveller in Asia. She holds an MBA from INSEAD and an MS in Engineering from Utah State University. Maya can be found at

Twitter (NYSE: TWTR) is what’s happening and what people are talking about right now. To learn more, visit

We are all Stardust: The first monograph dedicated to Parisian Jeweler Extraordinaire Frédéric Zaavy