HANOI, VIETNAM – Media OutReach – 20 January 2022 – At the “Science for Life” symposium launched on January 19, ahead of the VinFuture Prize Award Ceremony, Professor Gérard Albert Mourou who won Nobel Physics in 2018 said that he is researching thorium, an abundant resource that could help humans solve the energy problem for up to 20,000 years. 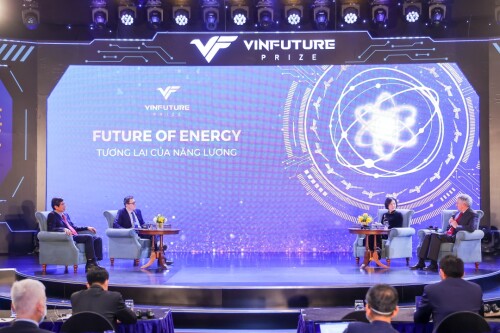 The professor, who is also a member of the VinFuture Prize Council, said that Thorium was being studied to replace Uranium in nuclear power production. If successful, this will be an effective solution for the depletion of energy sources.

According to Prof. Mourou, Thorium has three advantages. The first is its abundance in nature. “Compared to other power production’s inputs, if Carbon is one unit, Uranium is five, then Thorium is up to 1 million units,” he said.

Second, Thorium produces much less waste than Uranium. And thirdly, the life cycle of toxic materials of Thorium is very short compared to Uranium.

“That is why it is an opportunity for us in the field of nuclear energy. This is an area that we had never explored before and we can now. The energy source can meet the needs of 10 billion people for a period of 10,00-20,000 years,” Prof, Mourou said.

Study on new energy sources is now an urgent mission. This is one of the reasons ahead of the VinFuture Prize Award Ceremony, there was a session on new energy, with the participation of many leading scientists.

At the event, Professor Sir Richard Henry Friend said that the mission was an extremely necessary and difficult task, emphasizing the importance of new energy.

Fortunately, it is something science and technology can solve, he added.

“Ten years ago, the message to reduce net carbon emissions to zero by 2050 was considered as nonsense. But now, with the advancement of science and technology, it is possible,” Professor Friend said.

“Science and technology have reduced costs. Back in 2010, the cheapest form of energy was coal and nuclear power, and a small part was wind power.

“Ten years later, the costs of solar power reduced sharply, much more than the most optimistic person ever thought.”

Solar power is also an energy source attracting the attention of many scientists at the talk. If Professor Antonio Facchetti was excited with solar energy, Professor Sir Kostya S.Novoselov, the winner of the 2010 Nobel Physics Prize, turned his attention to storage options to improve the efficiency of renewable energy sources.

Of which, graphene – the material that brought Professor Novoselov the 2010 Nobel Physics Prize – is one of the optimal solutions.

“Modern batteries have complex structures and designs, but their efficiency depends on power generation. Our research is not limited to this metamaterial (graphene) but many other materials.”

Meanwhile, Professor Nguyễn Thục Quyên (University of California, US) said that each country must use its own strengths to create its own energy source.

“For example, Việt Nam has a long coastline, with a lot of sunshine in the Central region, which has the advantage of wind power, so this is a strength to take advantage of,” said the Chairman of the VinFuture Prize Pre-Screening Committee.

At the “Science for Life” symposium held on January 19, there were two more sessions on the Future of Health and the Future of Artificial Intelligence, with the participation of many leading scientists in the world, notably Professor Katalin Kariko, who built the foundation for the COVID-19 vaccine’s mRNA technology, greatly contributing to the global fight against the pandemic.

At 8:10pm local time on January 20, the Inaugural Award Ceremony of the Global Science and Technology VinFuture Prize will be held at the Hà Nội Opera House. The Ceremony is to be streamed live on VTV1, digital platforms of VTV and VinFuture, and international media platforms such as CNN, CNBC, Euronews and TechNode.

Welcoming Hyun Bin to the Madame Tussauds family in Asia

7-Eleven Spices Up Your World With A Brand-New Ready-to-Eat Menu of Deliciously Fiery Dishes!

Southco Expands Its Footprint in India Through Darshana Acquisition