HONG KONG SAR – Media OutReach – 29 March 2021 – A study led by scientists at Hong Kong Baptist University (HKBU) has decoded the genomes of the deep-sea clam (Archivesica marissinica) and the chemoautotrophic bacteria (Candidatus Vesicomyosocius marissinica) that live in its gill epithelium cells. Through analysis of their genomic structures and profiling of their gene expression patterns, the research team revealed that symbiosis between the two partners enables the clams to thrive in extreme deep-sea environments. 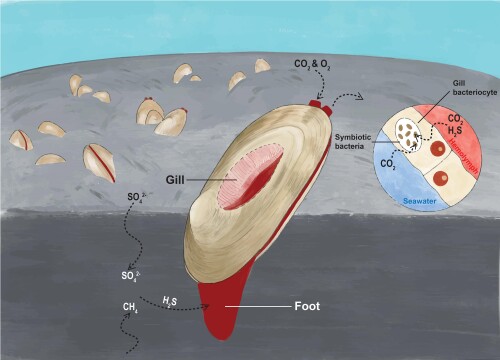 Figure 1: The drawing shows a clam with its foot extending deep into the sediment to gain access to hydrogen sulfide. The foot and mantle of the clam are red due to the presence of haemoglobin for gas transport in the blood, which is an adaptation to the low-oxygen environment. (Drawn by HKBU student Hu Juntong) 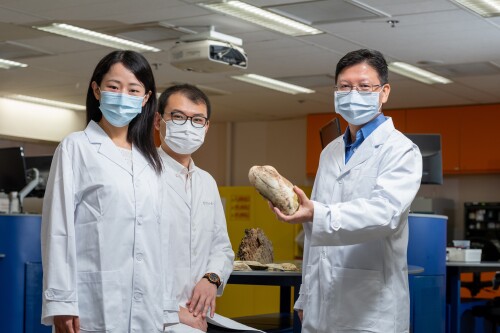 The research findings have been published in the academic journal Molecular Biology and Evolution.

Due to the general lack of photosynthesis-derived organic matter, the deep-sea was once considered a vast “desert” with very little biomass. Yet, clams often form large populations in the high-temperature hydrothermal vents and freezing cold seeps in the deep oceans around the globe where sunlight cannot penetrate but toxic molecules, such as hydrogen sulfide, are available below the seabed. The clams are known to have a reduced gut and digestive system, and they rely on endosymbiotic bacteria to generate energy in a process called chemosynthesis. However, when this symbiotic relationship developed, and how the clams and chemoautotrophic bacteria interact, remain largely unclear.

A research team led by Professor Qiu Jianwen, Associate Head and Professor of the Department of Biology at HKBU, collected the clam specimens at 1,360 metres below sea level from a cold seep in the South China Sea. The genomes of the clam and its symbiotic bacteria were then sequenced to shed light on the genomic signatures of their successful symbiotic relationship.

The team found that the ancestor of the clam split with its shallow-water relatives 128 million years ago when dinosaurs roamed the earth. The study revealed that 28 genes have been transferred from the ancestral chemoautotrophic bacteria to the clam, the first discovery of horizontal gene transfer—a process that transmits genetic material between distantly-related organisms —from bacteria to a bivalve mollusc.

The following genomic features of the clam were discovered, and combined, they have enabled it to adapt to the extreme deep-sea environment:

The clam relies on its symbiotic chemoautotrophic bacteria to produce the biological materials essential for its survival. In their symbiotic relationship, the clam absorbs hydrogen sulfide from the sediment, and oxygen and carbon dioxide from seawater, and it transfers them to the bacteria living in its gill epithelium cells to produce the energy and nutrients in a process called chemosynthesis. The process is illustrated in Figure 1.

The research team also discovered that the clam’s genome exhibits gene family expansion in cellular processes such as respiration and diffusion that likely facilitate chemoautotrophy, including gas delivery to support energy and carbon production, the transfer of small molecules and proteins within the symbiont, and the regulation of the endosymbiont population. It helps the host to obtain sufficient nutrients from the symbiotic bacteria.

Cellulase is an enzyme that facilitates the decomposition of the cellulose found in phytoplankton, a major primary food source in the marine food chain. It was discovered that the clam’s cellulase genes have undergone significant contraction, which is likely an adaptation to the shift from phytoplankton-derived to bacteria-based food.

The genome of the symbiont also holds the secrets of this mutually beneficial relationship. The team discovered that the clam has a reduced genome, as it is only about 40% of the size of its free-living relatives. Nevertheless, the symbiont genome encodes complete and flexible sulfur metabolic pathways, and it retains the ability to synthesise 20 common amino acids and other essential nutrients, highlighting the importance of the symbiont in generating energy and providing nutrients to support the symbiotic relationship.

Unlike in vertebrates, haemoglobin, a metalloprotein found in the blood and tissues of many organisms, is not commonly used as an oxygen carrier in molluscs. However, the team discovered several kinds of highly expressed haemoglobin genes in the clam, suggesting an improvement in its oxygen-binding capacity, which can enhance the ability of the clam to survive in deep-sea low-oxygen habitats.

Professor Qiu said: “Most of the previous studies on deep-sea symbiosis have focused only on the bacteria. This first coupled clam–symbiont genome assembly will facilitate comparative studies that aim to elucidate the diversity and evolutionary mechanisms of symbiosis, which allows many invertebrates to thrive in ‘extreme’ deep-sea ecosystems.”

Influencing Future of Cloud Security with MITRE ATT&CK® for Containers

DEUTZ AG: High hopes for 2021 following a successful start to the year for DEUTZ

Over 150 new Rewards are now available on the yuu App. Redeem amazing Rewards for as little as 400 yuu Points and link your...