HONG KONG SAR – Media OutReach – 11 May 2021 – Researchers from Hong Kong Baptist University (HKBU), in collaboration with Cornell University, have developed a novel targeted therapy for triple-negative breast cancer (TNBC) that uses a specially-designed nano-carrier to deliver the Chinese medicine compound gambogic acid (GA). The invention enhances the anti-cancer effect of GA and reduces its damage to off-target organs. The invention has the potential to become a more effective therapeutic option for TNBC. 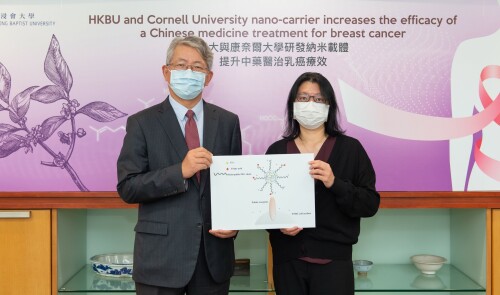 The study was supported by the Vincent and Lily Woo Foundation, and the research findings have been published in the international medical journal Frontiers in Oncology.

GA as a breast cancer treatment and its limitations

TNBC accounts for 10-24% of all breast cancer cases and it also grows and spreads faster than other types of breast cancer. There are limited treatment options for TNBC and it has a high risk of recurrence and metastasis. In the advanced stage of the disease, the five-year relative survival rate is only about 12%.

GA is a herbal compound isolated from a dry, brownish resin called gamboge, which is derived from Garcinia hanburyi, a plant with a long history of medicinal use in Southeast Asia. Previous studies have shown that GA can inhibit the growth of cancer cells. However, its clinical application is limited by the fact that it is rapidly eliminated from the circulation system and has poor water solubility, which makes it difficult for GA to reach the cancer cells. Furthermore, high dosages of GA can cause damage to off-target organs due to its toxicity.

In the search for a more effective treatment protocol for TNBC when compared to existing options, Professor Bian Zhaoxiang, Director and Tsang Shiu Tim Endowed Professor in Chinese Medicine Clinical Studies of the Clinical Division of HKBU’s School of Chinese Medicine (SCM) and Dr Kwan Hiu-yee, Assistant Professor of the Teaching and Research Division of SCM, together with the research team of Professor Chu Chih-Chang at Cornell University, designed a novel nano-carrier to enhance GA’s efficacy as a TNBC treatment and reduce its off-target toxicity.

The researchers made a bio-degradable nano-carrier out of polyester urea urethane (PEUU), and they decorated it with folate (also known as vitamin B9) and arginine (an amino acid). Folate receptors are highly expressed in TNBC cells, and they can serve as a target for therapy. Arginine is a positively charged amino acid, and it can attract the nano-carrier to the negatively charged tumour surface. These features enable the nano-carrier to target and deliver GA effectively to TNBC cells.

Reduced off-target damage to other organs

Furthermore, when compared with free GA, the GA delivered by the nano-carrier caused less damage to the off-target organs of the mice including their hearts, livers and lungs. It also caused minimal damage to their kidneys and spleens as relatively low levels of GA were detected in these two organs.

“As demonstrated in our study, the novel nano-carrier for GA offers many benefits when it comes to treating TNBC,” said Dr Kwan Hiu-yee.

“The application of nanotechnology in this study modernises the delivery of Chinese medicine, thereby enhancing its therapeutic efficacy. We believe that our nano-carriers have great clinical potential to treat TNBC and other types of cancer,” said Professor Bian Zhaoxiang.

Herbalife Nutrition Survey: 90 Percent of Respondents Said “People Who Want to Be Successful, Can’t Be Afraid to Make Mistakes”