PARIS, FRANCE – Media OutReach – 11 May 2021 – CrowdSec, which puts online security into the hands of users themselves and has already helped to identify hundreds of thousands of malicious IP addresses worldwide, has announced a US$5 million round of seed investment from European VC Breega. 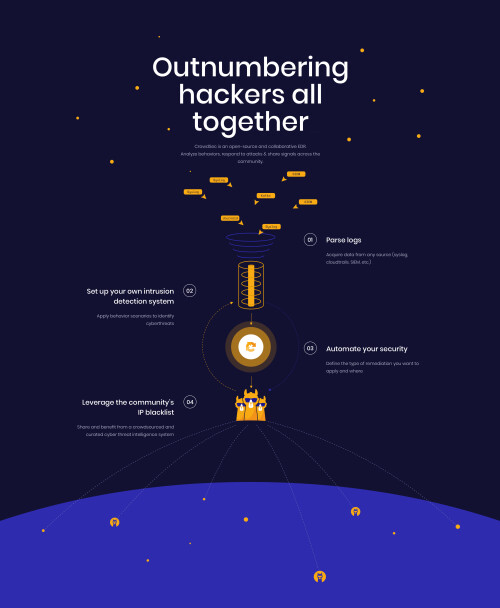 Making the internet a safer place, and empowering everyone with a rock-solid, free, first line of defense, whether they are individuals, institutions, SMBs or larger companies is the mission of European start-up CrowdSec, who is aiming to rethink cybersecurity by creating a collaborative endpoint detection and response (EDR) system, empowering a novel open-source strategy to combat attacks on any network, anywhere. This new round of funding will allow the company to expand its global community of users and contributors, including in China and Asia, to enhance its functionality, and to recruit new talents to fuel its expansion.

Collaboration and global focus are keys to CrowdSec’s open-source approach, as outlined by Philippe Humeau, CEO and co-founder, CrowdSec. “Every year, states, banks, businesses and institutions spend billions of dollars to protect themselves”, Humeau commented. “They are nevertheless hacked by groups with much lesser means. This cyberwar is asymmetrically favorable to hackers, who benefit from time, use stolen resources and mainly open-source software, and face increasingly fragmented and permeable perimeters, including Cloud drives, SaaS, VMs, containers, and VPNs. Our goal is to rebalance the cyber-security game by creating innovative, free and collaborative software in order to fight, together, hacking on a global scale.”

This is an approach that suits the Europe-based CrowdSec, where the business community is diverse and steeped in a rugged individualism developed over centuries. At the heart of CrowdSec is an independent, open culture that is founded upon its collaborative inclusivity.

Open source code has been an essential for the rapid growth of China’s tech sector and today China is one of the biggest consumers and contributors of of open source technology. China tech companies such as JD.com, the world’s third largest internet company by revenue, were early adopters and it is this pioneering spirt that has attracted CrowdSec to expand its footprint in China. Through close collaboration with the open source community in China, CrowdSec is seeking to assist the worldwide internetworked community to now maintain its own safety.

CrowdSec’s team is expected to grow within 18 months. Launched in December 2020, its solution has already been adopted in more than 90 countries, with a very rapid acceleration of the daily adoption rate. CrowdSec’s vision is international in scope and extends across all continents, including Asia and Greater China. As part of this growth, CrowdSec is the process of reaching out to key open-source influencers in China and other parts of Asia.

The company is currently in discussions with large customers, hosting companies, cloud makers and private companies globally. It will officially launch its commercial offering later this year, but will remain entirely free for its community. It has already reported several hundred thousand IP addresses as dangerous.

The arrival of the largest real-time map of hacking

The ‘bad guys’ of the IT world, the hackers hidden on the ‘Dark Web’ and elsewhere, use the IP addresses of machines they compromised to anonymously attack IT assets. CrowdSec’s open-source filtering software blocks these attacks and tracks IP addresses used against members of its community in order to redistribute them and thus deactivate the attackers’ strike capability.

When a CrowdSec agent detects an attack, its report is curated by the platform and, if legitimate, shared with all users so that they can also protect themselves. This community generates, in real time, one of the largest IP blocklists in the world.

Being able to protect each other without having to trust one another is also a key benefit. When system administrators, DevOps and SecOps join forces, they far outnumber hackers. CrowdSec provides them with the tool to federate. CrowdSec not only locally defends IT assets based on IP behavior, but also generates the largest real-time hacking map on the Internet. A new generation of distributed Cyber Threat Intelligence that reshuffles the deck in the defense of Internet-exposed IT resources.

A solution adapted to modern constraints

Designed for modern environments, such as public clouds and containers as well as bare-metal or virtualized architectures in enterprises, CrowdSec’s software provides a strong first line of defense of unprecedented efficiency and versatility. The different types of remediation offered range from simple access prohibition to two-factor authentication, CAPTCHAs, rights limitation, transmission of information to a SIEM or to SecOps desks, for example.

CrowdSec can block port scans, web scans, password attacks, identity theft attempts, as well as application denial of service, bots, credit card stuffing or fraud, among many other classes of attacks. By not exporting logs and collecting only the minimum amount of data (time stamp, attacking IP and recorded behavior) CrowdSec complies with the European GDPR and, more generally, respects data privacy.

Emphasizing the culture match behind the US$5 million investment, Breega Partner and Co-Founder Maximilien Bacot explains, “Digital has become a natural extension of our lives and we need to provide an answer to the societal problem posed by mass hacking. The techniques (or trends) developed over the last 30 years have clearly failed to address this problem. So, it seems logical to us to propose a community-based approach, which has already proven effective in so many other areas, yet has not been applied to cybersecurity… until now.”

CrowdSec is the open-source massively multiplayer firewall enabling you to respond to attacks and share signals across the community. Security should be available to everyone. We make it happen. For free. www.crowdsec.net

Blue Cross Launches Double Privileges to Cheer for the World No. 1