The growing success of bike-sharing apps in China is being held up as a shining light of how the Internet of Things (IoT) should drive more capital expenditure into 5G technology in future, according to latest research published by China International Capital Corporation (CICC). Its analysts, including Leping Huang and Erica Chin-Yi Chen, highlighted the successes of Mobike and Ofo, the country’s two leading bicycle sharing services, as illustrating just how much potential the industry presents.

“The successful implementation of communications technology into bicycle-sharing services shows communications technology can actually create new added value for Internet of Things service providers such as Mobike,” the study said. Mobike – which already has 800,000 of its cycles on mainland streets – uses 2G and GPS chip sets to keep track of its fleet, allowing users to identify the location of bikes using GPS. They can also use the system to lock or unlock the bikes remotely.

“If more IoT services can pick up in the near future in various business segments such as smart meters and smart homes, they may come to drive 5G [capital expenditure],” the study adds, and significantly increase the volume of communications chips and modules being shipped.

A recent Cisco report showed the number of connected technologies within the IoT, from computers to monitors for domestic cars, is projected to grow at an annual compound rate of 23.1 per cent between 2014 to 2020, reaching 50.1 billion things in 2020. Cisco’s forecast, which predicts the number of IoT devices to increase from 8 per cent in 2015 to 26 per cent in 2020, suggests “the supporting systems which manage lots of IoT terminals and cloud computing companies” will also be among those to benefit from the trend.

The CICC study also tips cloud computing technology providers, telecom supporting systems to IoT terminals, modules and chips, as major future beneficiaries. The country’s first joint venture investment bank, CICC says the success of bike-sharing already represents the long-awaited boost the telecommunications industry has been yearning for, after becoming mired in the dilemma of where its next major revenue stream might come from to pay for 5G networks.

“The case of shared bicycles shows us that internet and artificial intelligence companies can significantly improve the quality of service through the use of Internet of Things technology,” analysts said. “Communications companies can also implement a new back-charging business model.” 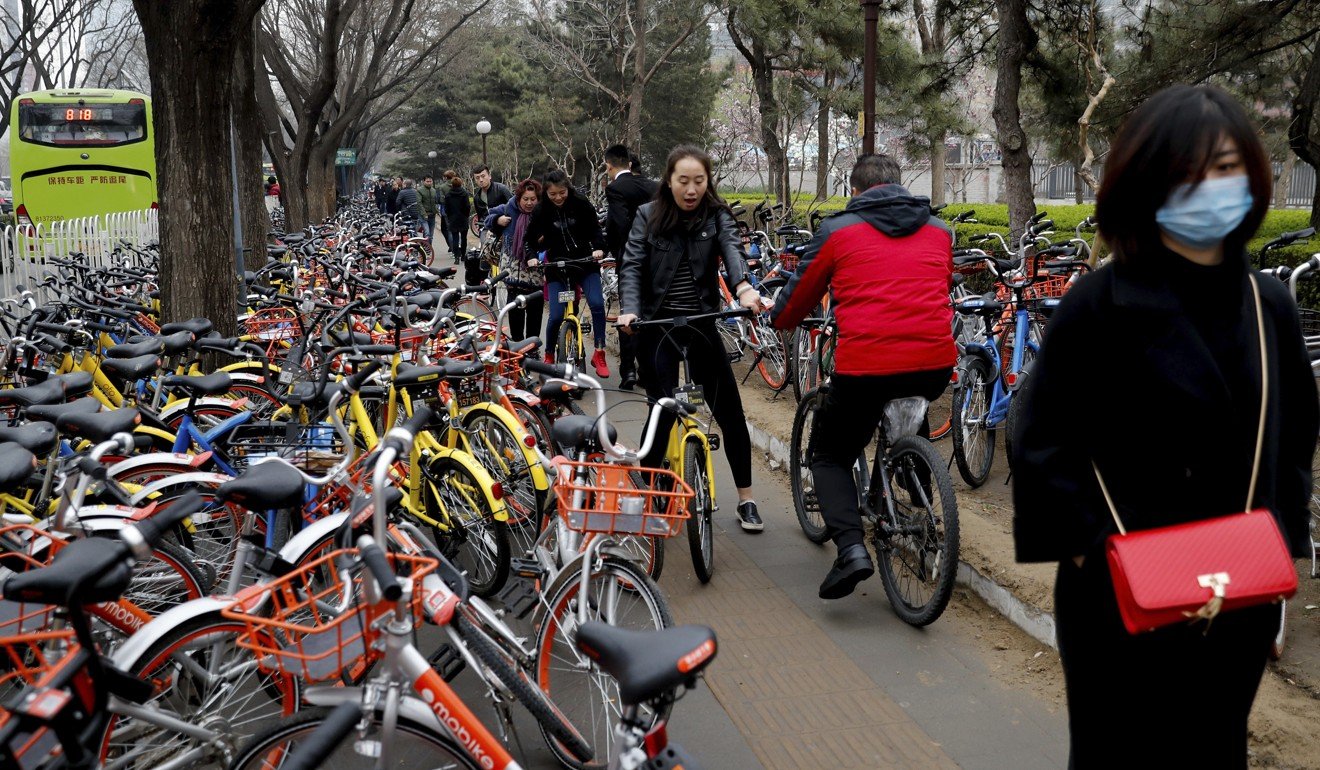 As opposed to having the telecom operators charging domestic users in the current internet age, in the coming age of artificial intelligence and big data, where companies will want to collect as much data from their users as possible, the telecom operators are expected to [almost exclusively] charge industrial clients, such as bike-sharing companies, to generate income, the CICC report predicts. It added the bike-sharing companies are not competing on bike costs, but hoping to earn more from the customer data gathered from those using their bicycles.

The report says Ofo, China’s biggest bike-sharing company, is going to set up its own narrow-band-IoT (NB-IoT) bicycle system to control its fleet. The successful implementation of communications technology into bicycle-sharing services shows communications technology can actually create new added value for Internet of Things service providers such as Mobike. “The company has partnered with China Telecom and Huawei to create a new generation of intelligent bicycles using NB-IoT for bicycle positioning and management,” the analysts said, meaning Ofo too has recognised “the importance of IoT in this war”. Meanwhile, the majority of Ofo’s bikes on the streets today still don’t feature IoT chips, while Mobike’s do.

The study’s other major prediction is the huge potential offered by IoT product upgrades, from 2G components to modules using 4G NB-IoT or 5G IoT. While transmission distances could be extended by about six times, and speeds increased from 30 kbps to potentially 1Mbps, terminal costs themselves could potentially be halved, it said. Terminal battery life, too, can expect to be expanded from several days to more than 10 years.

“Assuming the cost of an IoT module is 200 yuan (US$29), although the module will increase the total cost of the bicycle by a quarter, it can help reduce scrap rates…from 40 per cent to around 10 per cent,” the CICC analysts said, by being able to track the fleet more accurately. “It can also technically improve a bicycle’s utilisation rate, yielding higher annual incomes by as much as 50 per cent,” analysts said.

Exabytes and Easyparcel Join Forces to Help Those Who Need Food