According to the JobStreet.com Job Outlook Report, the hiring climate is looking positive for the 1st quarter of 2013. 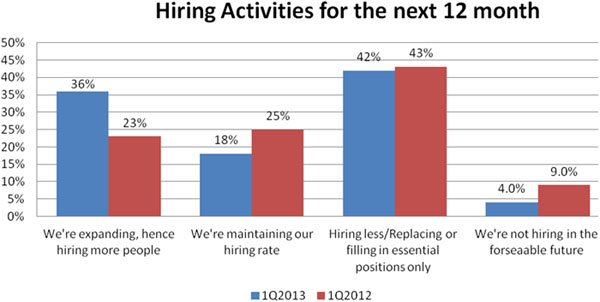 For the First Quarter (Q1) of 2013, Malaysian employers have a brighter job outlook for their hiring initiatives in the new year. 36 per cent of the respondents are expecting to increase their hiring in the next 12 months. This is seen from a hike of 13-point from the 23 per cent compared to Q1 of 2012. Among the 36 per cent who indicated they were expanding the most are for sales, marketing, accounting/finance, and manufacturing.

Less than 5 per cent of respondents acknowledged that they are not hiring in the foreseeable future, a 5-point drop from the 9 per cent in 2012 which also reflected the positive job outlook for Q1 of 2013. 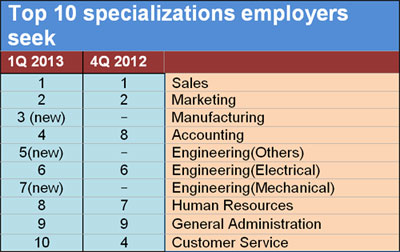 For most industries, jobseekers in sales and marketing are still the most sought after, followed by those with expertise in manufacturing, accounting and engineering. In comparison with the last quarter, three new specializations have entered the top 10 list. They are manufacturing, engineering, and mechanical engineering. Respondents from major industries such as hotel & restaurants, finance computer and IT, mining (oil & gas) reported that they would most likely experience a better job growth in the next 12 month.

The positive  job outlook from the survey for Q1 is mainly attributed to the strong economic growth with forecasts of the economy expanding by a margin of 4.5-5.5 per cent as announced in the Budget 2013.The turnover rate is also expected to be higher in the beginning of the year as many choose to switch jobs after receiving bonuses. Nevertheless, according to the feedback given in the survey, most employers are also selective in their hiring to ensure they get high-performance employees to meet the competitive global work environment.

A total of 227 JobStreet.com clients, managers and senior managers across various industries in Malaysia participated in this survey conducted in February 2013.